The Heat Is Zapping My Mojo

Well, it finally happened.  I've lived in this house for 11 years and the air conditioner went out yesterday.  As luck would have it, it's in the 80's right now.  Normally I would love the warmer weather but not so early in the year.  There's plenty of time for it to be in the 80's.  Where is the nice, Spring weather? I have three dogs and I was worried that they would get too hot.  It was almost 80 degrees in the house.  What was I doing during all of this?  Making cards, what else?  I have to admit. the heat took away some of my mojo but I powered through it.

I worked on an interesting challenge involving using four things that were mailed to me on my card, including part of a toilet paper roll.  I had to use the other side of my brain for that one.  I'll post a picture of the card when the challenge ends at the end of the month.

I also worked on a card for a challenge on Gina K Designs website called CASE the Designer, Lee Murphy.  This involved browsing Lee's beautiful gallery and choosing a card to re-create by making a few changes to it.  The card I made is below. 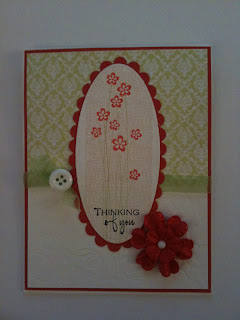