This my first time participating in this challenge. Here is my card: The image I used is from the GKD Eclectic Summer STV kit and the sentiment is from the Spring Mix STV kit. Cardstock is SU bordering blue and ruby red, and PL ivory. I used SU markers to color the image. The lace and ribbon are from a box I had from my mom. Thanks for… Gina K's talented daughter Alicia illustrated this stamp set with these adorable fairys. I made this card for my 14 year old to give to a friend at her sleepover birthday party. This is a great set for teens! I colored the image with watercolor pencils and a water brush. I added stickles to the wings and mushroom spots, and additional bling with the self adhesive rhinestones. Thanks for… Continue

Here is a card I made using Theresa's newest set Purr-fectly Delightful: I used Gina K's Pure Luxury card stock in her newest colors of Innocent Pink and Wine with Everything. The Dp is from Basic Grey Lemonade. The ribbon and button are from Gina's romance collections. The image was colored with markers and water brush. Thanks for stopping by!

It's time for another GinaK CenterStage Spotlight Team Blog Hop!
Each artist was asked to design their project by drawing inspiration from these photos of the AMAZING Christmas Cookie Bouquet the CSS Team sent to Gina's DT Coordinator Jessica Fick:… 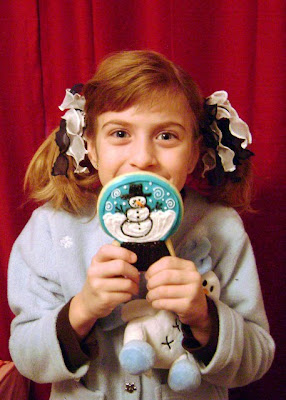 Welcome to the Tech Talk blog hop! Melanie has done it again, illustrating a great set with tons of images and sentiments to use. For my card, I chose to use one of the mugs, with some of the large emoticons stamped on them. The mugs are paper pieced from the new PL creme de menthe cardstock. MY card base is the new PL ocean mist cardstock, and the DP is from the Basic Grey Lemonade pack. The ribbon was white twill that I sponged with Vivid aqua ink to match the ocean mist… Continue

Welcome to the Life is Good blog hop! I just love Theresa's newest set, it has so many possibilities. For tonight's card, I wanted to use stamps I hadn't inked up from this set yet. So I chose to use the 2 deer silhouettes. I also used the trees from the set, which I stamped twice, then sponged with blue inks for a pretty wintery night sky. I then stamped the deer directly over in black. The base image is matted on PL in the navy cardstock, and the base of the card is PL kraft cardstock. I… Continue

Are you having fun looking at all the great creations using Nina's newest set, Lovely Shelf? This set has been fun to use, and it is great for paper piecing. I made a set of cards to give as a secret Santa gift. I made 2 of each card, and packaged them with envelopes in a large clear box.… Hello everyone! I am so happy and honored to be a part of this month's Centerstage Spotlight team. The stamp set I am previewing is illustrated by Theresa Momber and is called Life is Good. If you have enjoyed Theresa's previous stamp sets, then you will want to add this one to your collection also. It has some really beautiful images! Here is my card: The train and… Continue

It's time for another CenterStage Spotlight Challenge Blog hop!

I hope everyone had a great day and was able to share it with friends and family. We spent time with my parents and my sister and her family, and are full of turkey and pie! I did get in some stamping today, but can't show it yet. The past and present CSS teams will be participating in a blog hop tomorrow, then the previews from the new sets will start next week! Of course, the new sets are GREAT!! I used Rupa's Retro Boutique. I cut the stamp of the shelf and 4 purses into pieces so I could piece it together differently to make it smaller to fit the size of my panel better. The DP for the panels and the pieced purses are from Basic Grey. The scalloped border is… Continue